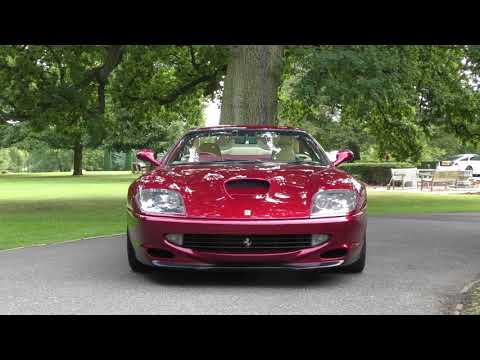 View PDF
20+ people have viewed this

Firmly placed in Ferrari's history as one of their finest modern-era big GTs, the 550 Maranello's combination of elegant lines and legendary front-mounted 12-cylinder engine, meant that these cars had the potential to become instant classics. Following in the footsteps and sharing the DNA of the 365 GTB/4 'Daytona', the 550 Maranello is inevitability compared to its forbear. Few front-engined Ferraris have quite justified that comparison quite like the 550 Maranello. Styled by Pininfarina, like its illustrious predecessor, the 550 Maranello was similarly proportioned, adopting the classical combination of long bonnet, small cabin and a truncated tail. Classic Ferrari styling cues include a bonnet air scoop and hot air outlets behind the front wheel-arches recalling the great Competizione Ferraris of the past, whilst the rear incorporates Ferrari's characteristic twin circular lights. The heart of any Ferrari is its engine, and the 550 Maranello's 48-valve, 5.5-litre V12 develops 485bhp at 7,000rpm. The powertrain was housed in a tubular steel chassis, to which was attached aluminium coachwork, whilst the all-independent suspension incorporated dual-mode (normal/sports) damping, switch-selectable by the driver, which was complemented by speed-sensitive power-assisted steering. The six-speed manual gearbox complements a slightly more even torque curve ensuring that the power delivery was a little less frenetic, whilst excellent weight distribution and delightful road manners make the 550 Maranello a truly refined driving machine, whilst still capable of almost 200 mph. With styling that is ageing particularly well, a high-quality cabin, generous storage and an enormous 100-litre-plus fuel tank, the 550 Maranello really is the consummate 'European Grand Tourer' in the true Ferrari mould. In 2004, EVO magazine published a 'Greatest Driver's Cars' feature that set the 550 Maranello against the Porsche 911 GT3, Honda NSX-R and Pagani Zonda C12S. The Ferrari won. EVO stated “As with all great cars, there's no one facet that dominates the experience. Yes, the engine is mighty, but the chassis is its equal. There's never been a supercar that's so exploitable and so rounded in its capabilities.” The Ferrari 550 Maranello was originally supplied through HR Owen in November 1998 in the rare colour combination of Rosso Fiorano with Crema and Bordeaux Red Hide together with the following options: 19" Modular Split Rim Alloys, Red Brake Calipers, Chrome Side Mesh Grilles, Chrome Gear Gator and Gear Lever, Leather Headlining, Electric Seats, Diamond Quilted Rear Parcel Shelf, Bordeaux Carpets, Dual Tone Interior to Top Dash, Door Inserts, Centre Console and Steering Wheel, Seat Piping in Bordeaux. This car comes with its original leather bound wallet with owners manual and service book together with its official Ferrari Toolkit. It has an extensive history file which includes invoices and old Mot's and has also just undergone a complete major service together with cambelts by one of the leading Ferrari specialist in our area. The condition of the paintwork and interior leather is exceptional for its age and mileage and truly needs to be seen to be appreciated.

This is the manufacturer's list specification for this model, please verify the details when you view the vehicle. The list below will not include any additional options fitted to the vehicle or modifications.

Please contact us for details of our vehicle warranty.

X
Free Online Vehicle Valuation
Back
Vehicle Valuation
Compare Saved Vehicles
Top
Close
Your Cookie Settings
Select your cookie settings
Strictly Necessary Strictly Necessary cookies are essential to let you move around the website and use its features, such as accessing secure areas, shopping baskets and online billing. These cookies allow our website to provide services at your request.
Functional Functionality cookies are used to remember the choices you make, e.g. your user name, log in details and language preferences. They also remember any customisations you make to the website to give you enhanced, more personal features.
Targeting Targeting cookies collect information about your browsing habits to deliver adverts which are more relevant to you and your interests. They also measure the effectiveness of advertising campaigns.
Save Settings
Cancel Changes

Your settings will take affect when you refresh the page or move to a new page. Find out more about cookies